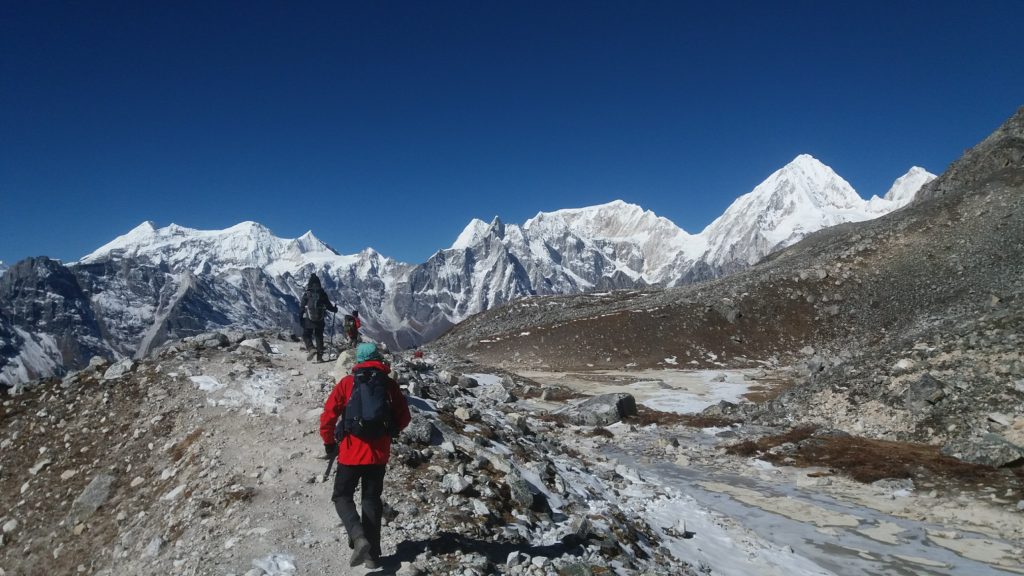 There are many popular treks in Nepal among which Manaslu Larke Pass is one at 8,163 m above sea level, located in the Mansiri Himal of west-central Nepal.

Manaslu Larke Pass trek is one of the most undaunted and venturesome trekking trails in Nepal. It was officially opened as an adventure trekking by the government for foreign trekkers in 1991. It is commercial trekking. Trekking along the trails of the Manaslu Larke Pass can turn out to be risky sometimes.

Therefore, the trekkers are suggested to travel in a group of at least two people with a registered professional guide instead of travelling by oneself.  The trek rewards with astounding mountain scenery along with the local livelihood influenced by Tibetan culture.

Mt. Manaslu is also known as “The Killer Mountain,” because of its toughness while mounting. Manaslu Trek has been attracting tourists in increasing numbers each year as people are being more keen to explore the virgin trekking lands of the country.

The trekking begins from Arughat at 550 m, after an 8 hours drive from Kathmandu to Pokhara-Dhading. You will cross Budi Gandaki, Soti Khola, Machha Khola, and reach Tatopani village. Walking across many suspension bridges, into the forests, and waterfalls will lead you to Samdo village.

The colorful Buddhist prayer flags and the Chortens you see along the trail will leave you speechless and mesmerized. Walking along the trail with spectacular views of the Himlung, Manaslu, North Annapurna II mountains, you will reach the top. The feeling of being in the lap of the Himalayas is surreal. You will be staying in basic tea houses or lodges and during your trek meal will be provided.

On your way back, you will be descending from Larke Pass. You will get to explore the local lifestyle of people living in the Himalayan regions of Nepal along your journey. Passing through the Yak pastures, vegetations and walking by the bank of Marshyangdi river, you will reach Jagat village. From Jagat, you will take a drive to Besisahar in a local jeep. On reaching Besisahar, you will return back to Kathmandu on a private/public vehicle, enjoying the dramatic scenery of the hills and rivers along the way.

Manaslu Larke Pass is undoubtedly one of the most beautiful treks that will take you to the beautiful regions of the Himalayas. You will pass through the distinctive villages with a unique set of cultural diversity that is remotely located around Mt. Manaslu.

Manaslu trek is a remote, physically demanding, culturally enriching and scenically uplifting destination. The route takes you from the steamy lowlands with their terraced farming to the enormous gorges of the Budi Gandaki with its aquamarine waters and amazing waterfalls.

Suspension bridges in Manaslu trek vary in terms of both length and height. The yearly monsoon often washes minor bridges away due to which the trekkers have to use semi-submerged rocks. While crossing the Larke Pass at an elevation of 5,125 meters, you will see the most magnificent of the Mount Manaslu and close and ravishing view of beautiful snow-capped mountains.

You will be sleeping in a basic tea house every night with two single beds. Toilets are mostly shared and can be outside of teahouses. Heating is only available in the dining area. You will be served food in the lodges. Wifi is available in most of the lodges but it won’t be much faster and you might also have to pay extra for it.

Weather in the trekking regions of Nepal is never a sure thing. Manaslu circuit at an altitude of 5,123 m has quite unpredictable weather and fluctuates from time to time. The clouds interchanges with sunny moments, humidity, rain, and strong winds, it is obvious that the Manaslu Circuit trail has several seasons in one day. It varies throughout the year from sunny to cold and dry to wet.

Therefore, you must be prepared for anything for wet, dry, cold, and warm conditions. The weather conditions you experience along the trails and the Himalayan regions depend largely on the time of the year you trek. Therefore, the best season to trek to Manaslu is during the Spring and Autumn.

Temperature and Weather of Manaslu Larke Pass Trek throughout the year:

Manaslu Larke Pass trek, since it officially opened in 1991 as an adventure trekking has become one of the most adventurous trekking trails in Nepal. The trek can turn to be risky sometimes, but with a fellow trekker or a group of trekkers, you can live some of the best moments of your life in this mountainous region. This is certainly a challenge worth conquering as you get to move high and low and experience the authentic, untarnished Tibetan cultures of the inhabitants of this region.

The trek will offer you mesmerizing views of the snow-capped mountains and subtropical forest along the trail. Also, grab the opportunity to experience the hospitality and explore the local lifestyle of the people. Spend your nights in the local tea houses and lodges and immerse yourself in the weather and cultures of the beautiful mountain village to create the best memories you will cherish forever.